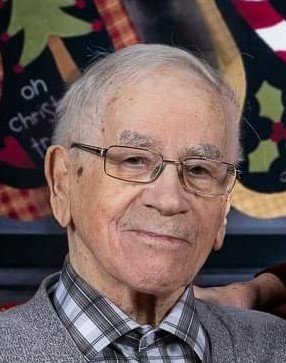 Please share a memory of Cyril to include in a keepsake book for family and friends.
View Tribute Book
Passed peacefully away at James Paton Memorial Hospital on January 11, 2021 at 96 years young. Born December 28th, 1924 on Indian Islands in the Dominion of Newfoundland. He is survived by his wife of 73 years Millicent and their four children Bernard (Gloria), Byron (Patricia), Phyllis (Tom Tokarchuk) and Dean (Denise) along with eight grandkids and eleven great grandchildren. Cyril was a long-time volunteer in the community of Corner Brook and spent decades contributing his time and energy with the Lion’s Club, the Masonic Lodge, St. John Ambulance and as a sidesman at St. John the Evangelist Church. A staunch supporter of the Liberal Party in Newfoundland, he helped elect several candidates in the Corner Brook area. Cyril started his career as a mechanic in Deer Lake and studied to further himself as a communications technician and went to work for C.O.T.C (Teleglobe Canada) in 1960. He retired at the age of 60 and continued to work part time as a First Aid Officer at mineral exploration camps with his son’s (Bernard) company. As Cyril aged, he enjoyed being at his cabin at George’s Lake and loved to be on the water in his self built sailboat. He had numerous friends that he loved to spend time with playing darts, cards and especially crib, along with having an occasional Crown Royal while doing so. Cyril also loved to see his family come to visit and to spend time with them all. He will be dearly missed and thought of often. Special Thanks to the staff of the Medical Ward and to Dr. Albadry for their care and compassion. Arrangements have been placed in the Care of Families Funeral Home, 9 Forward Drive, Lewisporte with visitation taking place on Thursday from 3-6pm (adhering to the government guidelines). Funeral service will take place on Friday, January 15th, 2020 at 2pm from the Baptist Church in Lewisporte for family only. (service will be streamed through Families Funeral Home Facebook Page) Interment will be held at the Baptist Cemetery in Lewisporte. As expressions of sympathy flowers are graciously accepted or donations in his memory can be made to the James Paton Memorial Hospital - Palliative Care Wing visit www.cnehf.nl.ca should you wish to place a donation online.

Share Your Memory of
Cyril
Upload Your Memory View All Memories
Be the first to upload a memory!
Share A Memory
Plant a Tree